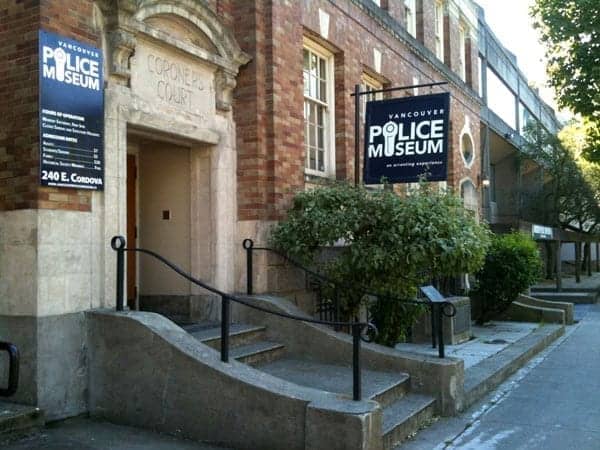 The Vancouver Police Museum is North America’s oldest police museum and one of Vancouver’s hidden gems.

Started in 1986 by Joe Swan, a former police sergeant and amateur historian, the museum is located in a heritage building that was once the Coroner’s Court, the City’s morgue,autopsy facilities, and the City crime laboratory. It houses over 20,000 artifacts, photos, and archival documents which can be searched online  including confiscated firearms and other weapons, counterfeit currency, police uniforms, archival documents, photographs, publications, and various other artifacts and memorabilia.

Among the more unusual items on display are a painted skull sent into the Vancouver Police Department, some fairly intense anatomical specimens left over from crime analysis,  and—in the behind-the-scenes area, which you can see on a tour—the “blood drying room,” where blood-soaked evidence was once hung to dry.

There is also a moving exhibit of the police officers who have died in the line of duty since 1886. 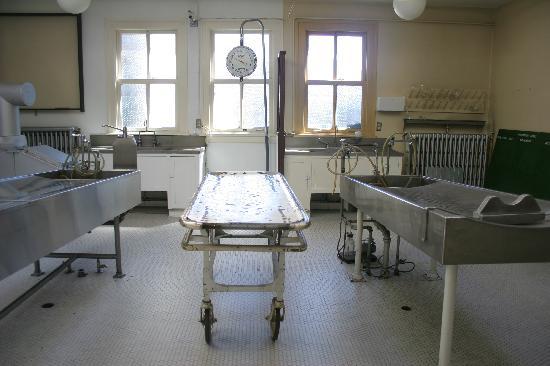 Barely changed since the last autopsy was performed here in 1980, the intact and authentic autopsy suite is open to all the museums visitors, An educational collection of human organs is displayed, originally collected and presented by the BC and Vancouver Health Department.

The Sins gallery holds an eye-widening collection of confiscated weapons, gambling devices, counterfeit money, and prohibited drugs. Here you can test your skills as a witness by recreating a mug shot photo from memory, or become a mug yourself in the perfect photo-op jail cell.

The True Crime gallery houses photos and real evidence from some of Vancouver’s most notorious and unsolved historical crimes, including the Milkshake Murder, Babes in the Woods, and the Krosberg Murder. Please note that some photos and objects in this gallery may not be suitable for all visitors.

The museum also offers walking tours of the neighborhood on the theme “Sins of the City”. These tours take you into the basements and alleyways of Vancouver and through the history of bootlegging, prostitution, and murder in the city.

You’ll be fascinated and appalled in equal measure by what you learn – who knew Vancouver had such a dark side?

5 Things Canada Gave To The World

Give while you shop with This Counts Canada

Killer Canadian content on Netflix (& the best of Canadian...

Oh Canada – Celebrate July on Netflix with the #StreamTeam