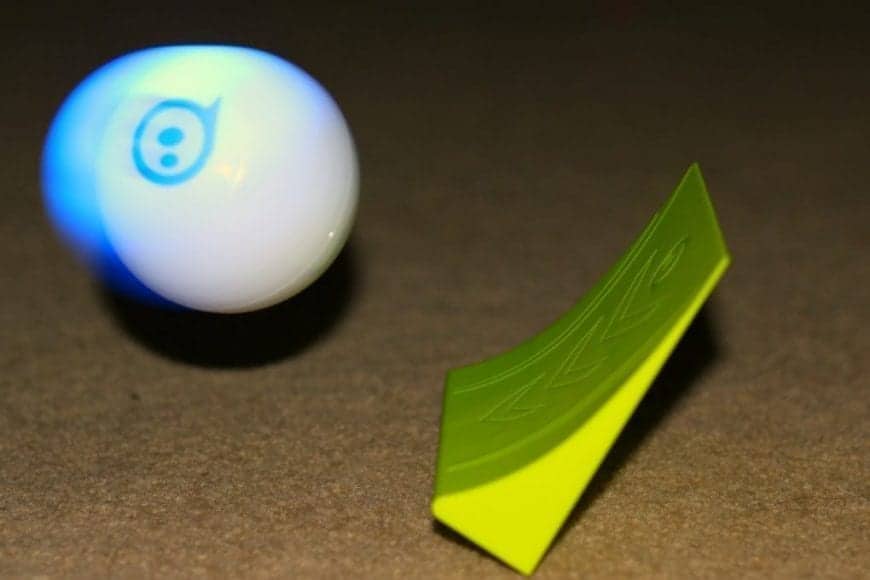 When I was first asked to review Sphero, I wondered how much fun a remote control ball could be. The answer?

Sphero is so much fun that everyone in the house fights over who can play with it. They have all downloaded the apps to their devices, and I have to hide it in the cupboard at night to stop the older boys playing with it into the early hours of the morning. That’s how much a remote control ball can be.

Of course, it’s not just a remote control sphere it’s also an interactive ball that has plenty more tricks up its sleeve. There are 30 games available for the Sphero in on both iTunes and Google Play, many of which are free. We downloaded “The Rolling Dead,” “Sphero Colour Grab,” “Sphero Exile,” “Sphero Lights” and “Go Go Mongo with Sphero.”

The most popular among the older kids was Sphero Colour Grab. The game displays a colour on your screen, and then the Sphero flashes different colours. You have to grab the Sphero when the flashing colour is the same as the one displayed on your screen. Sounds simple eh? You would think so, but it’s tough to do – but strangely compulsive. The more you miss, the more determined you become to win. Be careful if you download this free game – you may not leave it alone for hours.

Above is the screen that is the primary interface. The list on the left is some of the tricks Sphero can perform, and the coloured circle allows you to change the colour of the light inside, and the large circle is used to direct Sphero. It is very simple and very intuitive. You can name your Sphero so that if you are playing with multiple others Spheros, you always know which one is yours. As you may notice, our son called ours Rolly Polly Olly, but I’m not allowed to tell you that because he is 15!

One useful piece of information – once your sphero is linked to your phone it cannot be hijacked by someone else’s phone. I know this because our 15-year-old tried very hard to divert the Sphero when I was playing, I mean testing it.

It wasn’t only the kids & the teens who had fun. My husband & I both enjoyed ‘testing’ it, and when our 28-year-old daughter came round, I thought she was going to slip it in her bag and take it home surreptitiously. This is a picture of her playing and not enjoying herself at all.

and Jacqueline with Evey & Gabe, once she had downloaded to her phone.

The Sphero is attractively packaged and comes with everything you need to start having some remote control fun (except a smart ‘phone or tablet).

In the box, alongside the sphero, you will find a stand, a charging base, and two ramps. It was already charged and ready to go, so all we had to do was sync it with the iPhone. The instructions were very clear, and the ‘phone quickly & easily found the Sphero and made the Bluetooth connection. The set-up was minimal, and we were playing in under three mins – a real bonus when you have impatient family members jostling for the first try.

The Sphero is waterproof, pet proof and heavy handed child proof. It charges by induction and can reach a speed of 7 feet per second. The ramps are good fun, and you can get some pretty high jumps – but if you’re going too fast you also flip the ramps!

We were also sent the Sphero Cover which is available in Yellow/green, blue and orange. This was useful when we used it outside but did tend to pick up fluff in the house – although it was effortless to clean off with a damp cloth.

Sphero is an excellent resource for homeschoolers. The Sphero website has an education section that gets you started with introductory programming lessons using Sphero Macro Lab and Orb Basic.

Anyone can program Sphero. Beginners can get an introduction using Sphero MacroLab to create simple, repeatable programs and macros (tutorial videos here). More advanced students have the chance to dive deeper using orbBasic – a powerful application that takes programming with Sphero to the next level. To see these two programs in action, check out the Sphero Rangers Meetup page.

The one problem we had, was that occasionally it is hard to connect the Sphero at the start of play. You would have to delete it from the list of devices on Bluetooth and reconnect it. This didn’t take long but could be irritating when you had a slalom set up in the garden, and the kids were desperate to get going. But this is the only negative I have, and it is far outweighed by the positives.

The entire family had fun with Sphero and the available games certainly gives it extra value. I would recommend this for most age groups (about 5 and up), and it would be a great gift for those ‘difficult to buy for’ kids in their teens and twenties.

For fellow homeschoolers, this is an excellent way to introduce programming at all levels of education and the online meet-ups allow you to work with and learn from others who are also interested in learning how to program with Sphero.

Sphero is available from their online store