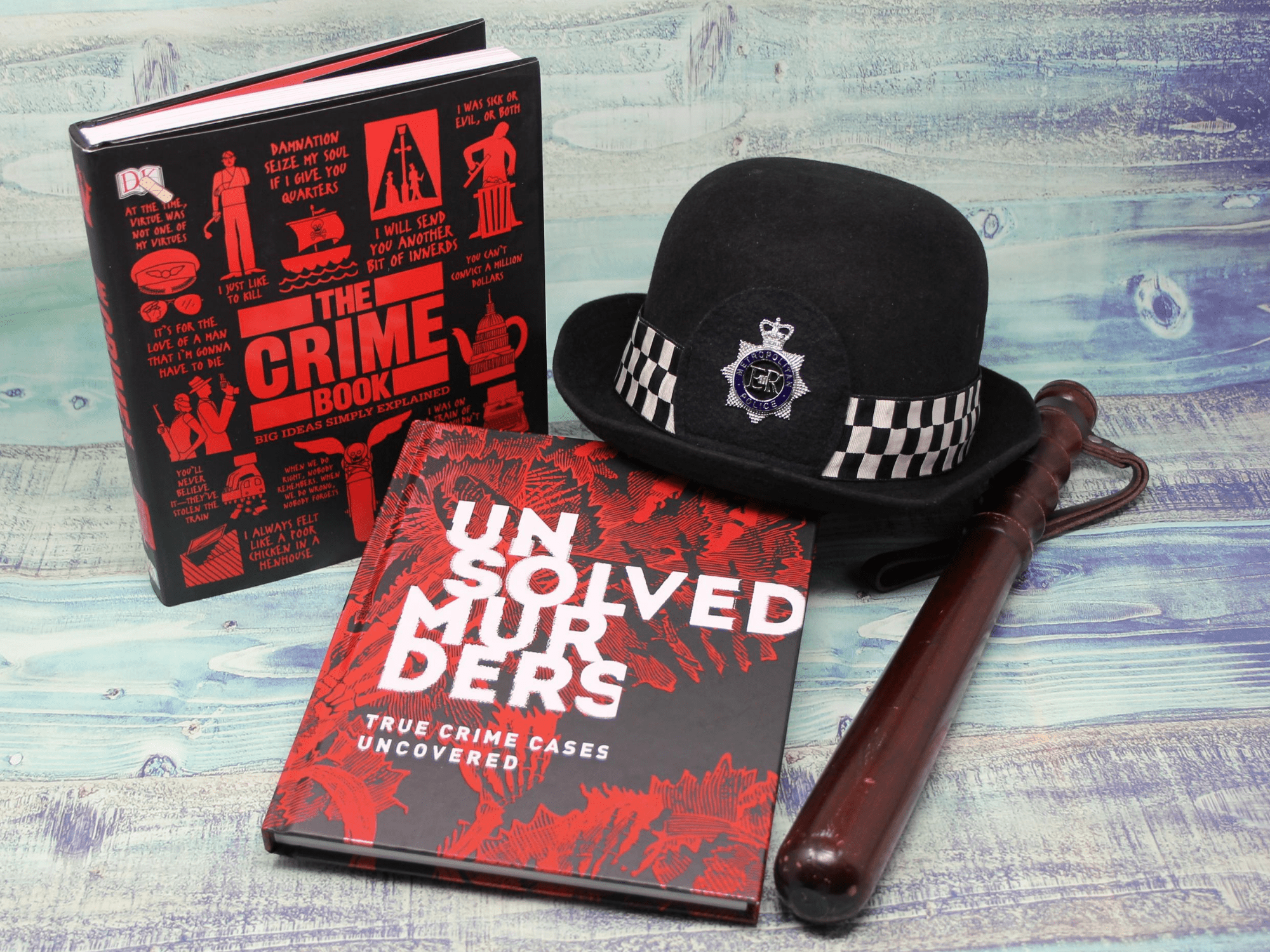 When Dorling Kindersley send me an email, with a list of books available for review, I do not hesitate to open it. I do, however, frequently struggle to choose just one or two titles. The last email was no exception, but I did, eventually, choose two books that spoke to me: The Crime Book and Unsolved Murders.

Unsolved murders or true crimes are not the subjects that first spring to mind when you think of Dorling Kindersley. However, the purveyors of some of the most beautiful books in the world have dipped their toes into the darker side of life. And I am glad that they did.

First of all, I was sent a copy of the latest addition to the Dorling Kindersley Big Ideas Series – The Crime Book. My review of The Sherlock Holmes Book & The Science Book talks about the series as a whole. Consequently, I’m going to skip talking about how fabulous this series of books is and stick to The Crime Book.

Quick Edit: I’ve had lots of people ask about the police hat and truncheon in this photo. Yes the police hat is mine, yes I was with the Surrey and then the Metropolitan Police in England. The truncheon is my husbands. We met, while on duty with Surrey Police, in the UK.

The Crime Book provides a terrific overview of a wide range of criminal endeavors. From bank robberies and kidnappings to white-collar crime and political assassinations, an entire spectrum of illegal activity is laid out.

Each crime is dissected and laid bare, yet this is done without resorting to gore or sensationalism. Instead, the necessary details are delivered, and then the crime is examined from all angles.

This is one of the great strengths of The Crime Book. You can read:

Another great strength is that The Crime Book features a wide range of crimes, avoiding the trap of focussing on serial killers. Instead, while you can read about serial killers and other, less well-known murders, you can also discover:

Overall, The Crime Book provides the reader with an intriguing taster of a broad range of crimes. The layout is clear and straightforward to read and provides an easy way to grasp the salient details quickly.

There is an eclectic yet cohesive mixture of crimes from a range of geographical locations, sociological perspectives, and time periods. This provides the reader with not only an interesting primer on each crime but the cultural context in which the crime occurred. As a result, the profiles of those involved feel even more meaningful.

If you or the lucky person for whom you are buying The Crime Book, are looking for an in-depth examination of a crime then this is not the book for you. By its very nature, The Crime Book provides you with a 10-minute or so read for each offense. However, this is also a strength.

As a true crime addict myself, I found it an interesting read to dip into. I was able to discover new criminals and crimes to investigate further. For example, I am now looking further into Liu Pengli and his crimes.

There is another advantage to the short and sweet format. When I came across a crime with which I was familiar, and had no desire to read about- for example, the murder of James Bulger- I didn’t feel like I had missed a whole chunk of the book.

On balance, would I recommend The Crime Book?

That would be a yes. Without reservation. Just don’t blame me if you end up being sucked down the rabbit hole of a new-to-you true crime.

With so many books on the market, focussing on unsolved murders, do we need another? This is the question I asked myself when I opened up Unsolved Murders. The book, not surprisingly, focusses on some of the most infamous and perplexing unsolved murders from the last one hundred years.

However, unlike some other unsolved murder books, Unsolved Murders does not dwell on graphic descriptions of crime scenes or the injuries to the victims. Instead, the book describes the murder scenes with a 1950’s FBI “Just The Fact’s” manner. This approach provides enough information to explain the “who, what, where, when, and how” of the murder.s. Meanwhile, we are spared any unnecessary graphic details.

This is an important point when you have kids in the house. I know our kids are apt to may pick up any books they see on the shelf or look over my shoulder when I’m reading. Thankfully there isn’t a single image that I would be concerned about my kiddos seeing. As a result, I didn’t have to read it while performing an excellent impression of a meerkat on the lookout for imminent danger.

The bulk of each of the 20 “case-files” begins with a focus on the backgrounds and lives of the victims. Following this backgrounder, the book discusses the investigation and any potential suspects.

There is a pleasingly wide range of unsolved murders in the book. From the Villisca Ax Murders and the Zodiac Killer to The Tylenol murders and the drive-by shootings of Tupac Shakur and Biggie Smalls.

The only “cross-over” case you’ll see in Unsolved Murders and The Crime Book is The Black Dahlia. Although this case is in both books, the entries are different enough to warrant reading both.

Are you are a true crime newbie? If so, this is the perfect introduction to some of the most puzzling unsolved murders of the 20th & 21st centuries. Thankfully, this is a time frame that excludes Jack The Ripper. So we are spared an entry on Londons famous 19th Century serial killer.

But what if you already know a little bit about some of humanities darker side?

No problem. The variety of crimes in Unsolved Murders provides even the most seasoned true crime addict an insight into something new.

Go out and buy your copy of Unsolved Murders asap. The book doesn’t have any answers. However, just perhaps, this book will send you on a journey of exploration which ends with you solving one of these crimes. 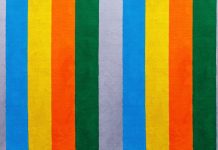 5 Ways To Creatively Display Your Books in a Small Apartment 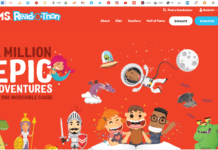 Join The MS Read-A-Thon – Read Books, Have Fun, And Raise Money For @mssocietycanada 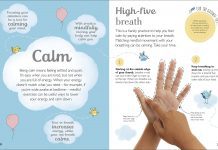 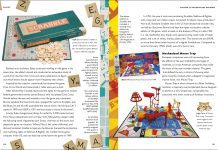 How to Make Your Family’s New House Feel Like Home

5 Ways To Creatively Display Your Books in a Small Apartment

Tips for Supporting Your Child Through Puberty

“Science Rocks” by @DKCanada – This Book Will Rock Your Summer...