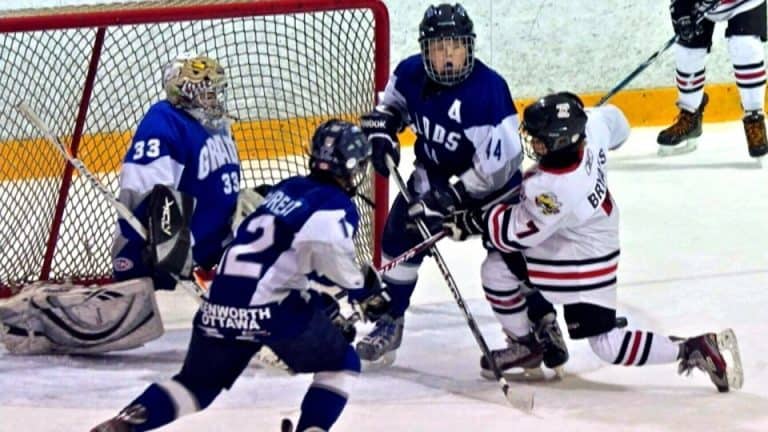 If you want your children to grow up to be the type of kind, generous, empathic Canadian that will make you and our country proud, enroll them in hockey. This might not be your first thought when thinking of those personal qualities, and admittedly, when I think of professional hockey my thoughts usually jump to dropped gloves, swinging fists, and lost teeth. However, just as most people are multilayered, so too is our nation’s great sports obsession. Dig deeper into any professional hockey team, and you will find the qualities you see beating at the heart of our magnificent country.

The Vancouver Canucks support national mental health initiatives, produce STEM resources focused on hockey, run health and nutrition programs for kids, take part in the local “Raise A Reader Day,” run a club to empower first nations students, created the Canuck Autism Network which is a critical BC resource for families who live with autism, the list goes on.

The Canucks are a meaningful presence in communities across BC, and this is the socially responsible element of hockey which is at the heart of being Canadian.

Just as the professional team’s give back, so to do the Peewee and community hockey teams across the country. Your child doesn’t have to be the next Crosby to benefit from Peewee hockey because playing the game is about what you can give on and off of the ice. It is about:

You might be thinking that is blindingly obvious, you can’t win a game without working as a team, but that lesson transfers to life off the ice as well. By discovering that they are an essential part of the whole, and not the only person who matters, your child is learning a valuable lesson that will serve them well throughout life.

How many of us have worked with the grandstanding colleague who thinks that the only person of value is themselves? That annoying person who thinks they are the only one to make an effort and who genuinely believes they save the day while being held back by everyone else.

Being part of a Peewee hockey team teaches the players to think of others instead of themselves, to recognize they are part of a team, and to understand that as a team player they are stronger than they would be as a lone star.

There is a special bond of friendship that is created when kids get together to do something they love. The friendships that grow from childhood hockey often become lifelong attachments, especially in our smaller communities.

There is something special about the time you spend with other kids, packed into a parents truck or minivan on a cold icy morning, as you drive off into the dark on your way to a game. Whispering secrets to each other and cracking up with laughter when the driver asks “What are you whispering about?”

These friendships become a part of you, something that is at the very core of who you are and I have lost count of the number of people I know who have aged out of Peewee hockey and gone on to coach or volunteer in some other way, to keep those friendships and hockey alive and kicking in their lives.

The hallmark of a good leader is someone who can motivate others, without using fear or threats to get things done. Leadership requires flexibility because not everyone responds to the same approach and the people who guide others the best are those who incorporate feedback from their team and understand they may be wrong.

These life lessons are invaluable to our kids and have made them stand out as exceptional young men when they have entered the workforce. For example, our nineteen-year-old had a part-time job with a national retailer, with the intention of earning a little money while he was at school. After less than a year, he was asked if he would consider going full-time as a manager, to which he said yes. He is now studying part-time and working full-time, supervising dozens of employees, all of whom are a lot older and have worked there a lot longer than him. Attending business training course with other managers twice his age he is comfortable, articulate and makes a valuable contribution. These are the benefits of learning to be a leader at an early age.

Did you know that the human brain is actually wired to work better, in general, when you work as part of a group? It was essential to survival that, as people began to live together in larger groups, every member of the social circle would contribute and help each other. As we have advanced to live busier lives in larger communities, it has become easy to grow insular, to forget about the people living around us, and what we could do for them.

Players in Peewee hockey teams are reminded of the importance of community by participating in projects that benefit others, without any reward for the team except the pleasure of doing good. For example, by helping the elderly, mentoring younger children or participating in activities to assist the homeless, children in Peewee hockey are rediscovering the pleasure of a more extensive social circle and what it means to live in a community instead of in isolation.

Children have to be taught the concept of charity. If they grow up in a household where volunteerism and giving is part of daily life, they learn there, and if the basic necessities of day to day living are the focus for family life, this valuable lesson can sometimes take a backseat to immediate needs.

By participating in the good deeds performed by their hockey team, players have a unique opportunity to discover how giving time and raising money for other people feels good. There is a particular kind of satisfaction from seeing another person benefit from something you have done.

One of the most moving things I have ever seen at a Peewee hockey game was the perfect example of how your little player can learn compassion through hockey.

One young fella was ready to take the potential game-deciding penalty. You could see he was incredibly nervous and as he made contact with the puck, he lost his footing a little and missed the goal by a mile. His own team players made the kind of noises you might expect, and his body language screamed defeat. Then, the captain of the opposing team skated up to him. The captain put his hands on the little guys’ shoulders, and they spent a few seconds helmet to helmet as the older kid imparted a few words of wisdom. He then gave the younger player a hug and a pat on the back as he skated away. The puck fumbler slipped away, standing tall and with a smile on his face.

When you can see an upset and disappointed member of the opposing team and go to the trouble of making them feel better because you know how upset he must be, you are learning empathy.

For the second year, Chevrolet is hosting the Good Deeds Cup, a competition that scours Canada for the Peewee Hockey teams that contribute to their community in ways that epitomise the Canadian spirit.

True to the essence of the Good Deeds Cup the winner will have bragging rights and a feature on Sportsnet,  but the $15,000 prize money is not for the team. The winning team gets to donate the funds to a charity of their choice. In this contest, they are competing for the chance to give, not to receive.

Visit www.chevrolethockey.com and view the video made by your team of choice from the top 10 finalists. Each full video view counts as a vote for your choice for the winner of the Chevrolet Good Deeds Cup. You can vote every day so don’t forget to put the link on your bookmark bar and support your favorite team.

Being a BC gal, I am particularly proud of the Fort St. Johns Flyers. These admirable youngsters braved temperatures in the -20’s to go out and shovel the drives of elderly community members, despite the short daylight hours at this time of year. Not only that but as well as ensuring the more vulnerable to get out of their home safely the Flyers players cut and delivered wood so that the seniors who were housebound could stay warm without worry. It is not for nothing that Fort St. John is known as the energetic city.

This wasn’t the only way they helped the “grey haired with experience” members of the community. When the Under 17 hockey championships were held this winter, in Fort St.John, the Flyers were there to pick-up and accompanied elderly hockey fans to the games. What could be better for a housebound senior hockey fan, living alone, than to have youths from the community think of them, and come to take them to a match?

This thought for the elderly is impressive enough but true to the spirit of those who live in the north and go the extra mile; the Peewee hockey team did not stop there. Despite their hectic personal and hockey schedules over the holiday period, they found time to staff the Salvation Army kettles at two of the larger local supermarkets.

Last, but by no means least, the food drive in which the boys and girls of the Flyers participated received a staggering 20,000 lbs of food, quite remarkable for a community of around 16,000 people.

In the midst of this hard work, the Flyers suffered a huge loss. One of the much-loved couches, Sid Davis, died in December. Sid was an integral part of the team and his wider community, and there were few people in Fort St. John who didn’t know him or feel the loss of his passing. To commemorate their couch, the Flyers have started the Sid Davis Hockey Scholarship Fund to ensure children in the community who cannot afford to play hockey can join in and benefit from everything this great port of ours has to offer.

Disclaimer: I have partnered with YMC and Chevrolet and have received compensation for this post. All opinions in the post are my own.

@ChewigemCanada – For The Need To Chew #Review

Whether In The Audience Or On Stage, Theatre Helps Your Child...

Second Strain of Flu Shows Kids Aren’t Out of Danger Quite...

How Kids Can Stay Safe On The Playground #BackToSchool