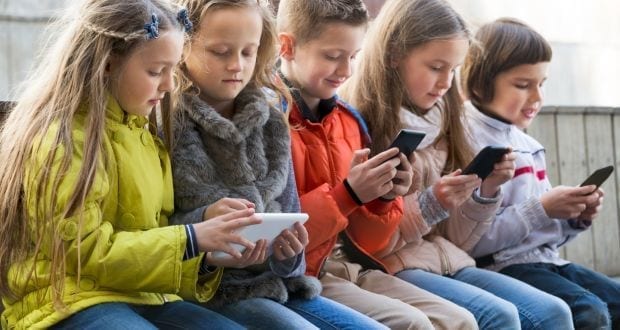 There’s no doubt about it: we are living in a digital world. As adults, we struggle with phone addiction just as much as young people do. Nearly 660,000 drivers use cell phones or other electronic devices while driving during every daylight moment across America. We experience symptoms of anxiety if our phone batteries start to drain or if we’re caught without our smartphone on our person. And while your kids probably want to be just like you, there might be reason to hold off from giving them a cell phone of their own.

Around two-thirds of parents worry that their child spends too much time on electronic devices. Those worries might not be entirely unfounded, considering that recent research has revealed that owning a cell phone might make your child more likely to be bullied or to bully other children. In a study of 4,500 elementary school children nationwide, more than half of third-grade bullies were found to carry their own cell phones. In contrast, only 35% of kids who were not involved in bullying activities had a phone to call their own. Around 75% of third grade bullies who took their harassment into the online world had cell phones. The results among fourth- and fifth-graders were fairly similar.

It’s not only bullying that’s the problem. Many Silicon Valley parents now believe that introducing cell phone use at a young age can stunt development and make a child much more prone to tech addiction. This isn’t just a bunch of out-of-touch parents reacting to fears that have been blown out of proportion; these parents are actually in the tech industry — and now they’re saying that screens should no longer be seen as a learning tool and that children’s screen exposure should be limited.

The pressure that’s put upon kids to fit in by owning a cell phone is definitely there. Although many parents are embracing the “Wait Until Eighth” movement to keep their kids from becoming attached to their cell phones at too early an age, it’s becoming the norm to carry a cell phone in grade school. From 2013 to 2017, the percentage of American third-graders who reported having their own cell phones spiked from 19% to 45%. In 2017, around 50% of fourth-graders and 70% of fifth-graders went to school with their own phones. It’s not just American kids, either. According to a CNN report, around 46% of European children aged nine to 16 owned a smartphone in 2014, while around 33% owned only a mobile phone with no smart capabilities. A report released last year revealed that 51% of German children aged six to 13 reported having their own mobile phone. In South Korea, around 72% of children ages 11 and 12 owned a smartphone and would spend up to 5.4 hours a day using them. Around 31% of Australian children in their fourth year of primary school owned or used a mobile phone in 2010; by the next year, around 43% of those students owned or used a mobile phone.

While there’s no “right” age to give your child a cell phone or expose them to screens, any parents would agree that the answer could be “as late as possible.” The American Academy of Pediatrics released new recommendations last year for children’s social media use, which included that children younger than 18 to 24 months avoid using digital media on a regular basis. For children ages two to five, screen time should be limited to one hour per day. And in general, the academy says that parents should avoid using media as a way to calm a child down and that all media content should be closely monitored. Screen time should be discontinued at least an hour before bedtime and meal times should also be screen-free.

Ultimately, you won’t be able to avoid the need for screens completely. For your child’s safety, you may need to get them a phone sooner than you’d like. But as long as the use of technology is limited and is closely monitored, the negative effects of phone screens and digital media can likely be minimized.