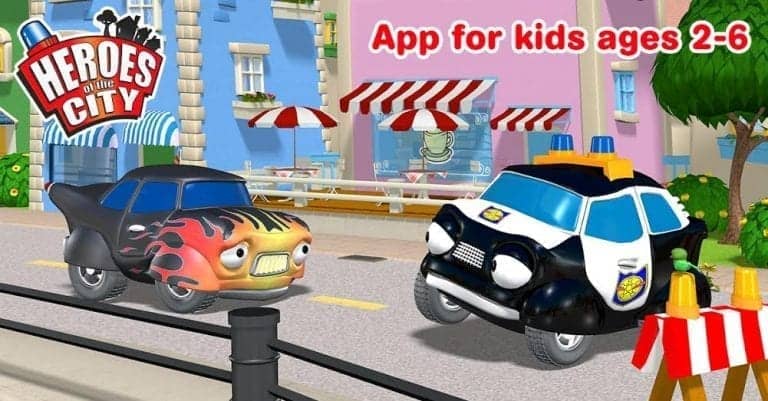 When the folks behind “Heroes of the City” contacted me & asked if I would like to review their app, I jumped at the chance. The little ones, especially Gabriel, love emergency vehicles, so an app & cartoon series based on them was sure to be a hit in our home.

If you are not familiar with Heroes of the City – let me give you the basics. The cartoon series and app allow children to follow the exciting adventures of Paulie the police car & Fiona the fire engine as they help their friends – finding thieves, putting out fires and solving an assortment of mysteries in the small town where they live. It is aimed at children aged 3 – 7, and I found that both of my little ones (5 & 7 at the time of writing) enjoyed it a great deal.

We reviewed the “Heroes of the City” movie app, and if you would like a glimpse of what we saw, you can watch the official trailer for the app here.

The free version of the app gives you one full movie, three games, and a musical video. The full app has over 6 hours of films and nine games available to play, and as you play the games, you can win trophies that allow you to unlock more fun. There are in-app purchases available but they are not necessary to advance in any games, so if you do not buy upgrades, the kids are still getting full enjoyment from the app.

We have our account set up, so in-app purchases cannot be made without a password. If you haven’t set that up, then no need to worry – Heroes of the City also has an inbuilt function so that when you try to make a purchase a box appears and you have to input particular text before moving forward – a great bonus feature for parents!

The games will appeal to a wide age range. Gabriel found some of them a bit challenging, but I like that – it means he will enjoy the app for that bit longer. There is a primary pairs game, which strangely enough, never gets boring (even for a mum playing with the little ones!) There is Gabes favourite game – placing the train tracks down so that the train can make it to the station and also a fun one that involves shooting Calamity Crow out of a cannon – a guaranteed giggle inducer every time.

I felt completely comfortable leaving them to play this on their own. You know how it is – some apps you leave the kids with while you put the kettle on and you come back to find something unsuitable on the screen. Well not with Heroes of the City. Every game and every video was enjoyed by both of the little ones and received the “No need to Worry” stamp of approval!

The characters are fun and easy for the kids to get to know and we liked the way the characters have their funny quirks. The stories work with those characteristics to create funny, adorable movies with lots of kid appeal.

To find out more you can visit any of their social media sites or the Heroes of the City homepage.

You can also download the free version or buy the full version (highly recommended!) here:

How To Trick The Tooth Fairy #Giveaway

Are you on the scent of Whiffer Sniffers? #Review

Do Colorforms Still Delight? We Investigate The Classic Toy & New...