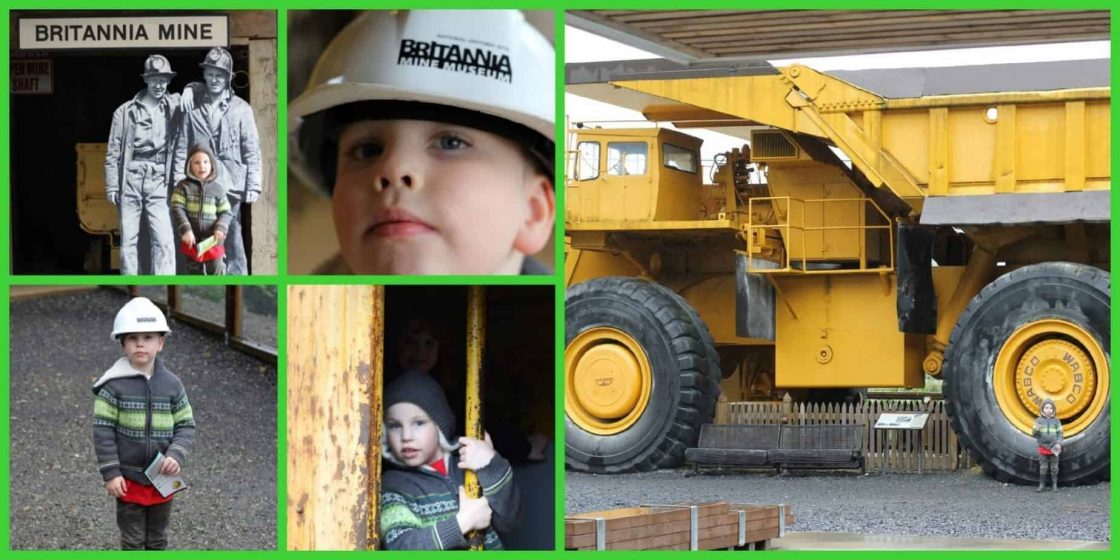 Britannia Mine museum has changed

It had been a few years since we last visited Britannia Mine. Gabriel was just a baby, and the five of us (Gabe in a baby sling!) went for one of the ‘clean-up’ days they used to hold. We went again last week, and we were astonished at the way in which the museum has been modernized and developed.

Gone are the tall chain link fence and gravel car park/mud pit and in its place is an unobtrusive perimeter that is skillfully blended into the surrounding area. They also now have a properly marked car park,  with disabled parking (hooray!) and not a spot of gravel or mud in sight. The beautiful new entry way was clearly marked, and accessible, and the staff at the ticket booth were warm, friendly and helpful. They talked us through the map and indicated what time our mine tour would be, where to go and even how long it took to get to the starting point. We embarked on our trip feeling welcomed and well informed.

If you are not aware of the history of the Britannia Mine, National Historic Site, here’s a little background.

Britannia Mine is not just a museum of mining, it brings to life the workers and families who kept the mine running, and the communities they created to live in. It gives you a unique insight into what it must have been like to live and work in such harsh conditions, but you also get to see the fun that was had by the population – including the annual Britannia Copper Queen award.As you can see our very own Copper (headed) Queen, Evey enjoyed sitting in the Copper Queens throne.

Evey also enjoyed panning for gold. She didn’t find any (she didn’t really have the right technique going on!), but Britannia do ‘salt’ the panning station with gold – so there is a good chance you will find some. Being the energetic dynamo, she is, her other favorite spot was the family play area where she was able to run & jump and dig in an enclosed, child-friendly area and the rain certainly didn’t dampen her spirits! In fact, it just served to cool us down a bit as we ran from point to point after her. I’m not sure how many times her face lit up as she called out “Look at this, ” but I know it was a lot.

Gabriel is, of course, our strong silent one – he may not say very much, ut he’s taking everything in, processing it all and communicating with us about it in his own unique way. He went and posed by the big (giant) truck as his way of asking for me to take his photo with it. The same went for the cutout of the miners that we took his photo with.

We were a little concerned about how he would deal with the underground train element of the tour (we had done this before so knew about the noise and the dark that you experience momentarily) but he was a star! We talked him through it ahead of time and he was excited rather than scared when the tourguide demonstrated how dark it was in the mine before electric light. The same went for the noise from the drill demonstration – we had bought his ear protectors and he was perfectly happy when we got to experience the noise levels of an early 20th century mine.

Our tour guide was knowledgeable and friendly & she was very good at involving all of the children by asking them questions. We are not normally fans of guided tours but this one was excellent and once the tour was over you were free to explore as much as you wanted to, on your own.

Even the gift shop was an attraction in itself! Evey bought herself a crystal, Jeff a fossil and Gabriel a book about diggers – genuinely something for all of the family

Britannia Mine Museum is open from 9 AM until 6PM every day. We spent about 3 hours there so you should plan for a half day visit.

Visit the Britannia Mine Museum website for more information, and to plan your visit

5 Kinds of Day Out That Moms AND Kids Will Enjoy

10 Summer Activities That Won’t Blow Your Budget Out Of The...