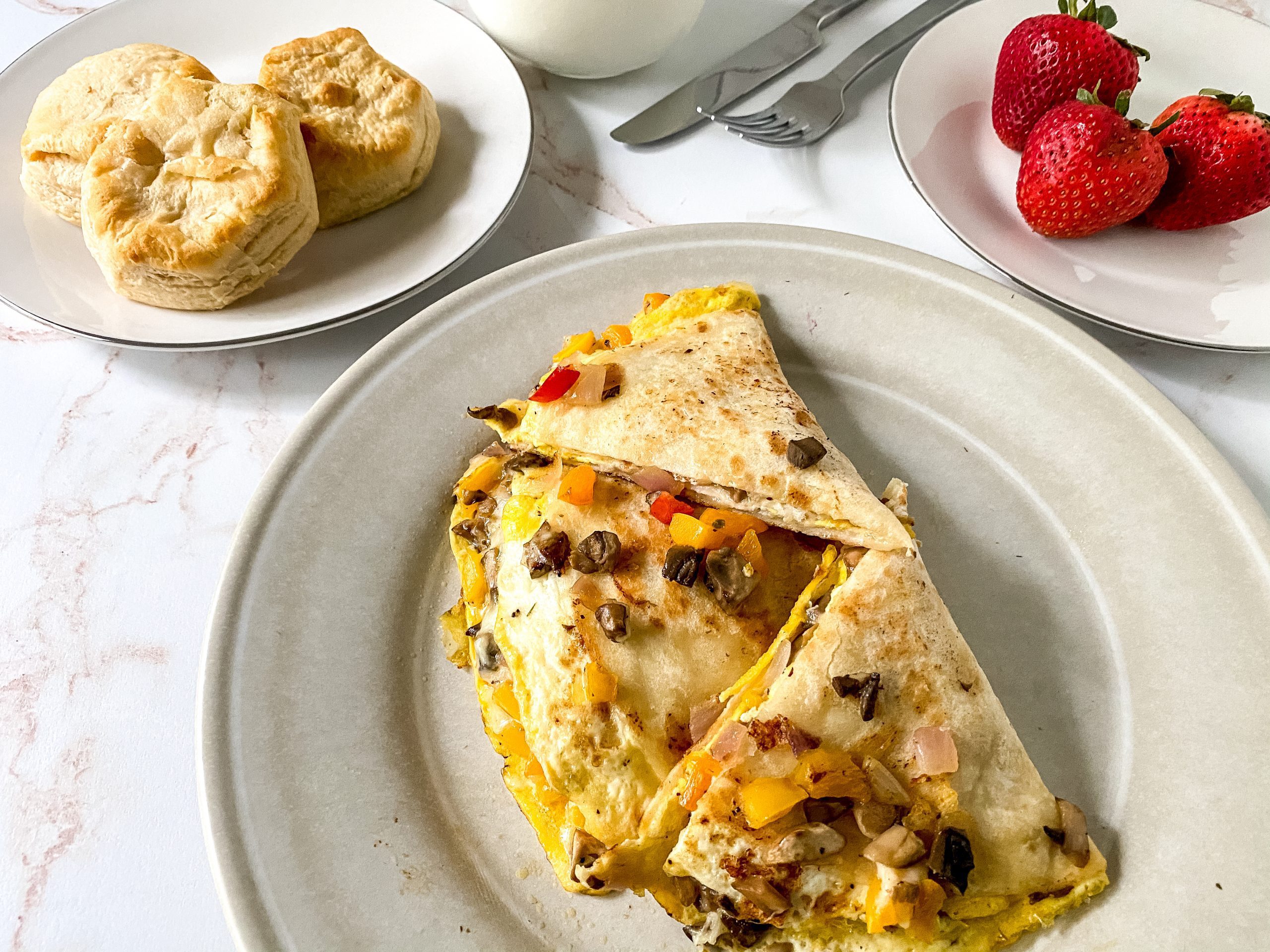 One of the best things about this easy breakfast quesadilla recipe is its flexibility.

While we have made ours with onion and peppers, you can use almost any vegetables you have on hand, as long as they will soften pretty quickly in the pan. Alternatively, you can ditch the veggies and add pre-cooked bacon, sausage, or similar for a mighty meaty option.

For a super quick breakfast, you can make these the night before and eat them cold or heat them in the microwave. Plus, we’ve made them the morning of a camping trip, wrapped them in foil, dropped them into a cooler, and enjoyed them the next day, warmed over a campfire.

We use these items from Amazon, but you can use any similar pan and utensils.

These ingredients make one breakfast quesadilla.

Dice your peppers and onions into roughly ¼ inch cubes and beat your eggs.

Measure out all of your other breakfast quesadilla ingredients and have them ready to go. You won’t have time to prep anything once you get going.

Butter can burn quickly. To avoid this, you can either heat the butter in a bit of oil or watch it carefully and lower the heat if the butter begins to burn.

Drop in the veggies and seasonings, and sautée until they are soft enough to insert a fork with a bit of pressure.

Remove the veggies and set them aside in a bowl.

Wipe the frying pan with a sheet of kitchen towel, then heat the remaining butter or oil again over medium-high heat.

Beat the two eggs and pour them into your pan. Tilt the pan from side to side so that the egg coats the bottom evenly. Be careful not to poke at the egg or stir it around, or you’ll end up with scrambled eggs rather than omelet-like eggs.

Once the eggs begin to firm up, sprinkle half of your cheese over the top in a roughly even layer.

As soon as the cheese starts to melt, place the tortilla down on top of the eggs.

Flip the tortilla over. On top of one half, sprinkle out the sautéed veggies in a roughly even layer. Don’t worry if some of the veggies adventure onto the other half or if they are not perfectly even.

Sprinkle the remaining cheese on the other side of the tortilla, opposite the veggies.

Fold the two halves over. You’ll find it easiest to slide your flipper under the half with the cheese on it and fold that onto the side with the veggies.

Leave the quesadilla in the pan, but take it off the heat. Use the flipper to lift up one end of the tortilla and check for light browning. Once it’s brown and the cheese is melted, slide your breakfast quesadilla onto a plate and enjoy.

Cooking Multiple Breakfast Quesadillas at Once

If you have a group of people, or you are making these for the family, these are our top tips:

‘Tis the season to think safety

How To Teach Your Child Emotional Intelligence – PLUS A Free...

5 Ways Your Kids Can Unwind After School Without Electronics

How To Make The Most Of Your Winter Vacation