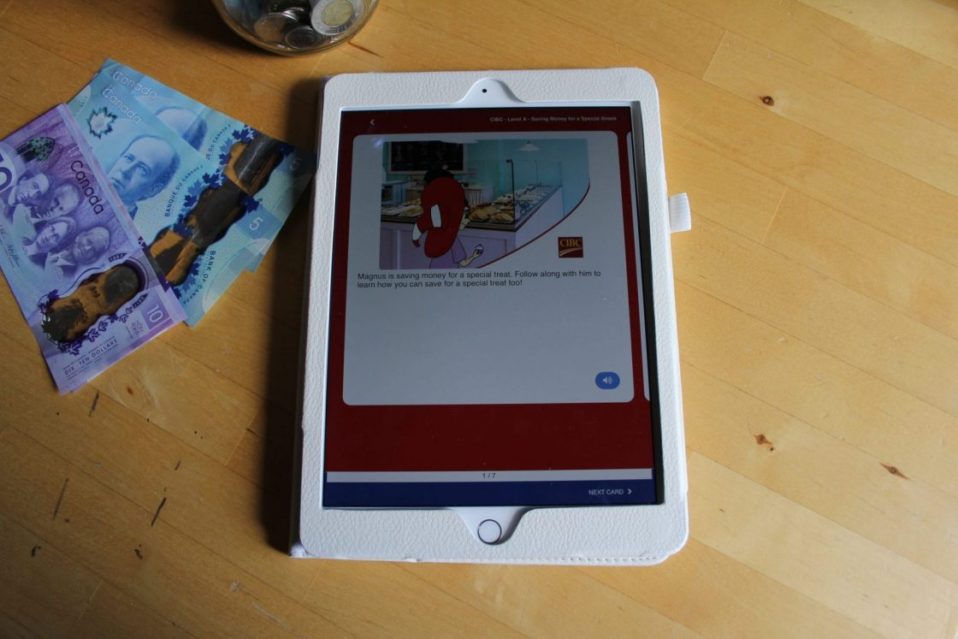 Disclosure: I have partnered with YMC and CIBC and have received compensation for this post. All opinions are my own.

One of the most significant challenges for those who live with autism and other cognitive disabilities is coping with many of the everyday activities that most of us take for granted. These are the things we do day in day out without thinking. The activities that the majority of children pick up as they go along.

For example, it is second nature to check you have your wallet and enough money before you go out somewhere. Our youngest son, who lives with autism, would not automatically do this and needs to learn how. This is where MagnusCards come in.

MagnusCards are digital how-to guides for children, youth, and adults accessed via a free app.
The guides are developed by Magnusmode, a company founded by Nadia Hamilton, whose brother Troy has autism. This inspired Nadia to start a company that leverages technology to empower and support people with cognitive special needs.

First, there are basic card decks that support life skills such as “ Checking Food Expiration Dates” and “Using An Umbrella.” Then there are several theme packs. These are created by Magnusmode in partnership with some forward-thinking companies and organizations. One of these companies is CIBC.

In partnership with CIBC, MagnusCards has developed 21 digital card decks. These work to empower those with special needs to gain financial literacy, learn money management skills, and bank independently. The sets of cards provide step-by-step instructions for skills. They cover areas such as depositing a cheque into an ATM, paying a credit card bill, using a debit card, and withdrawing cash.

Most of us who live in a home where someone has special needs have seen various support materials come and go. It can be difficult to know which are worth using. For this reason, we agreed to try out the CIBC MagnusCards with both our eleven-year-old son, who has severe autism and our 22-year-old, who is less severely affected. So, what can the MagnusCards do for youths, younger kids, those with severe disabilities, and those with milder issues?

Gabe is eleven and homeschooled because the local school system wasn’t able to meet his needs. This enables us to spend a lot more time on life skills. For example, and he has recently learned how to count money. This made the card decks “Getting ready to go out,” “Buying something with money,” and “Counting money” especially relevant for Gabriel.

We started by going through each of these card decks several times. Gabriel has trouble settling down to read something until he has looked at all of the pages first. So, we allowed him to swipe through the deck first, moving back and forth until he was ready to read together.

Along with a large, bright photograph, each card has a simple sentence or two. This prevents them from being too overwhelming. Plus, all of the activities are broken down into manageable steps. In addition, if your child is like Gabriel and has not yet learned to read, there is an option for the card to speak to them. We would read through a card and then talk about the step with Gabriel before moving onto the next action. Once we had worked through the entire deck, we discussed the whole process.

Having been obsessed with penguins since he was old enough to cuddle a stuffy, Gabriel was also already a huge fan of the penguins that CIBC use in their advertising. He was especially excited to see Percy the Penguin pop up at the end of the card decks to offer a little more advice.

Following the reading, we role-played, with Gabriel using the tablet to follow the steps on the cards for guidance. Finally, we took the tablet to the store, and Gabriel made his first independent purchase.

Being 22 and becoming more independent, JFB has asked that I do not use a picture with his face or use his full name. However, he was happy to try out the CIBC MagnusCards and share his thoughts. JFB much more mildly affected by his autism than his younger brother. But he still needs support and help with unfamiliar actions and situations.

This made the “Receiving and depositing an INTERAC e-Transfer,” “Budgeting your money,” and “Depositing a check into an ATM” particularly relevant to him. JFB said he was a little put off initially because the first card had the drawn mascot “Magnus” on it. He thought the entire set of instructions would be childlike. He was, however, happy to see that the instructions themselves were accompanied by photographs that depicted people around his own age. This makes him feel more like someone was just helping him out and less like a child being taught something.

What Did We Think?

CIBC MagnusCards are well thought out and produced with a wide range of age groups and abilities in mind. This is incredibly difficult to do, and the team responsible for the banking decks should be congratulated for designing a resource that is respectful to those who will be using it.

I feel much more comfortable knowing that JFB has this on his phone, should he need a reminder about depositing a check or paying a bill. For Gabriel, the app and decks have been a valuable addition to our daily life skills practice. It is hard to convey just how much you worry about your child when they have very little in the way of independence. Knowing Gabriel is learning basic money management skills and will have reminders available at the touch of a button helps me rest a little easier.

CIBC uses the hashtag #FitsYourLife in their social media advertising and interactions and this is a positive step to ensure that their outreach includes everyone, no matter how minor their banking needs are.

We will be sharing the MagnusCards app and, more specifically, the CIBC banking decks with all our friends in the Autism and special needs communities. I think this is an excellent tool for both teaching at home and school and for taking with you for support out in the community.

You can obtain your own free copy of the MagnusCard app and the free CIBC banking decks from the App Store, the Play Store, or through this direct link on the CIBC website.

If You Are Thinking Of Homeschooling Consider These Basic Points First

7 Tips for Setting Up a Comfortable and Efficient At-Home Classroom...